I am such a fan of Alita Battle Angel. This bust exactly captures her likeness in this movie. I was beginning to think I would never get her since it was almost 2 years since I ordered her. I was so surprised I suddenly got an email that it had shipped. Wow! 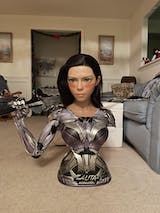 I'm so in love with her in the movie. But recreating such an interesting character in real life is just insane!!!!!!
All she needs now is to speak lol.

Thank you, Queen Studios, for producing this awesome bust. Alita: Battle Angel is a wonderfully done movie and has attracted a wide following and continues to add to it as more people see it and become fans. I was pleasantly surprised when you announced this bust and set my alarm to coincide with the opening of preorders. As soon as it was possible, I placed my preorder and then followed your progress as the bust was developed with input from us fans (which is really appreciated). When my deluxe edition bust arrived, I was very pleased with how well it turned out as pictures do not do it justice. THANK YOU again, Queen Studios for this Alita bust. Well done! #AlitaArmy #AlitaSequel

I really like Alita Battle Angel 1: 1 Special Edition Bust. Very detailed and beautiful workmanship. the waiting was worth it.