Carnage is one of Marvel most crazed and deranged villains. Once a killer known as Cletus Kasady, he transformed into Carnage after mixing blood with Eddie Brock, (the host of the alien symbiote Venom) during a prison escape at Ravencroft Institute. The symbiote magnified Kasady's psychotic nature making him even less mentally stable, and consequently even more dangerous.
Unlike Venom, Carnage is a singular creature, referring to himself as "I" instead of "We", because the symbiote has merged into Kasady's bloodstream.

Queen Studios 1/1 scale Carnage life-size bust brings to life the symbiote with sharp tentacle surrounding his face moments before an attack. The monster’s eyes are bone white, his mouth is wide open, and his tongue is whipping out, ready to catch his next victim. The bust stands at 75cm tall and is modelled from a variant cover of issue no.5 of the superb Marvel series Absolute Carnage. Queen Studios are excited to tell you guys that this full-size 1/1 Carnage bust will be a counterpart to our 1/1 Venom Life-size bust which brings to life Eddie Brock as Venom.

* Shipping rates depend on the product weight/size and shipping locations.
* For terms of conditions, please refer to the footer and check "Privacy Policy".
* Duties, taxes and any other charges related to customs clearance are not included in the price.
* Item shown is a prototype. When shipped, the final production piece may differ in appearance. 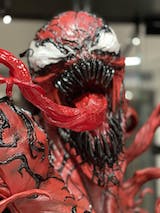 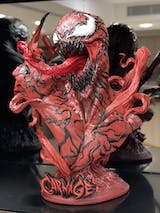